How do you say Thank You in Spanish? Obviously the one word you need to know is “gracias.” But, since you’re a greedy Spanish learner want more…

You got it. In this Spanish guide, you get 12 ways to say Thank You in Spanish. Each one includes explanations and an example sentence.

12 Ways to Say Thanks You in Spanish

This versatile “thank you” is the building block for nearly all phrases that express gratitude. “Grah-see-ahs” can be said quickly when thanking a shopkeeper or expressed as the most thankful and thoughtful response to a close friend or family. 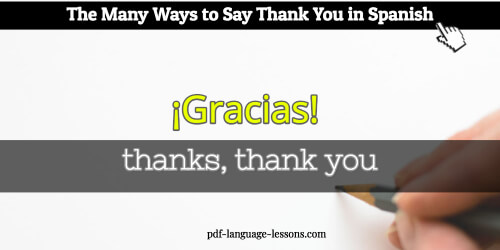 By the way, you should also listen to REAL Spanish.

So, here’s a free audio lesson from SpanishPod101.com, a popular Spanish learning website. It teaches you how to say thank you in Spanish. Press the play button below.

What’s the next way to say thank you in Spanish?

For a bigger showing of appreciation, “moo-chus grah-see-ahs” adds an extra dose of exactly how much thanks you’re giving. “Thank you very much” and “thank you so much” are interchangeable in Spanish with this phrase. Feel free to drag out the “oo” sound in muchas for dramatic effect. Even teens misspell in this way to give extra flavor when texting the phrase. 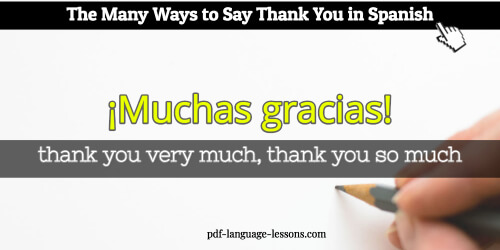 Spanish speakers say “it was nothing” in response to being thanked, instead of saying “you’re welcome.” “Deh nah-dah” is understood everywhere, and in some places they even shorten it to nada. 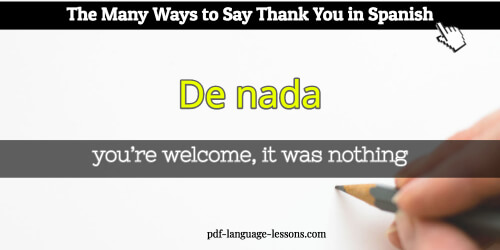 Another form of “you’re welcome” is “don’t worry about it” or “don’t mention it” which in Spanish is literally “there is nothing for which to thank.” “No ay deh ke” is a very humble way to respond and it is used only slightly less frequently than its counterpart de nada. 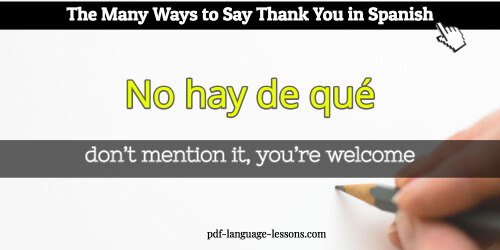 5. Gracias a todos y a todas

Used at the beginning or end of a speech, a group email, a work meeting or a yoga class, “grah-see-ahs ah toh-dohs ee ah toh-dahs” is long because it includes the male and the female forms of everyone.

“Thanks everyone” is useful as long as the group is more than two people. Conveniently, it is appropriate in both formal and informal situations. 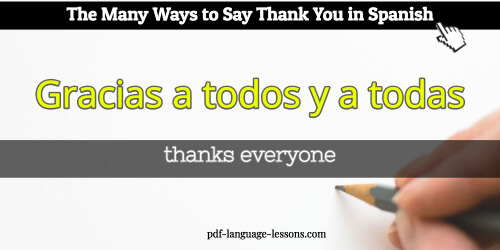 How would you say thank you in Spanish when you are…

If you forgot your phone in a cab or on a bus and it’s returned to you, “moo-chee-see-mahs grah-see-ahs” is a thanks that shows you are extremely thankful. With raised eyebrows or a sigh, it also may suggest you’re surprised, relieved or thankful for something you didn’t expect.

“Thank you so very much” can sometimes come off a bit effusive, so make sure you really mean it! 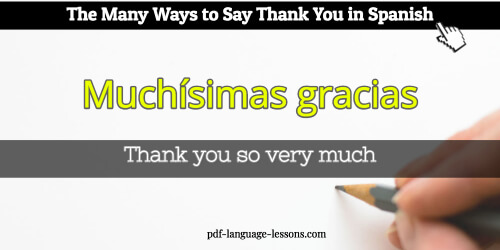 “Meel grah-see-ahs” is a twist on giving extra thanks, used by all ages. “A thousand thanks” in English sounds stuffy, but it’s quite the opposite in Spanish! It’s used interchangeably with “thanks very much” or “thanks so much.” 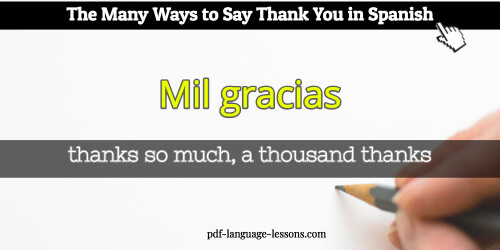 Deep thanks can be shared by explaining exactly where it came from, as in “thanks from the bottom of my heart.” This phrase is not frequently used, but it adds a deep feeling of gratitude and connection in the conversation. “Grah-see-ahs” covers the thanks and “toh-doh mee core-ah-sohn” means all my heart. 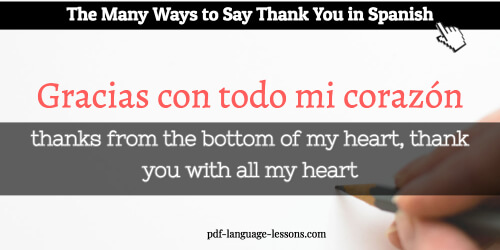 Some email etiquette suggests against this phrase, but if you decide to give thanks ahead of time, use “grah-see-ahs deh an-teh-mah-no” or gracias por adelantado.

“Thanks in advance” may be a bit pushy, but it gets the job done! 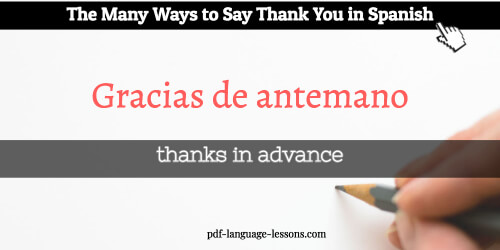 As sung in a Shakira and Alejandro Sanz duet, “teh ah-grah-deh-sko” shows gratitude by appreciating the other person. Depending on context, it can mean “I thank you” or “I appreciate you” as they say in the southern United States. 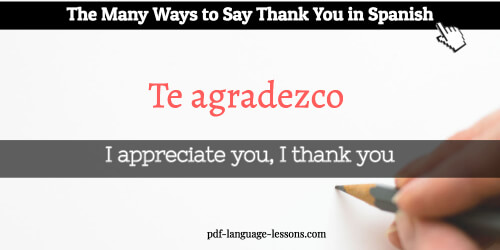 When going around the table on Thanksgiving, males will say “eh-stoy ah-grah-deh-see-doh” and females will say “eh-stoy ah-grah-deh-see-dah” before listing the things for which they are grateful. “I’m thankful” can also be used to replace a traditional thank you in more serious situations. But it’s pretty formal, so don’t use this to thank the barista who made your coffee! 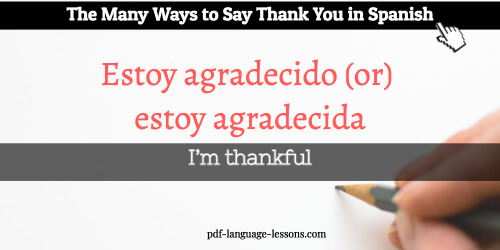 When you want to be gracious in declining something, “thanks anyway” is a great option. “Grah-see-ahs deh toh-dohs moh-dohs” is very polite and appreciates the other’s time or attempt. 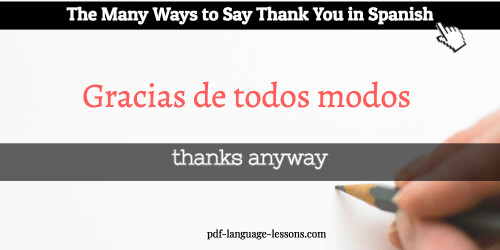 Now, below is a chart of all the phrases. So you can quickly review all the words.

Now you know a whole bunch of ways to say Thank You in Spanish.

If you want to keep this lesson, I suggest printing this page out. Or save it to your favorites so you can visit and review.

Now, do you know of any other ways of saying thanks in Spanish? Leave a comment.

P.S. If you want to speak Spanish, may I suggest SpanishPod101?

Basically, you sign up and they give you audio/video lessons and teach you real conversations. Can’t say hello? You will. Can’t write Spanish? You will. They have tons of lessons you can take at your pace. Very fun and easy way to learn Spanish.