You want to introduce yourself in Korean. Good. When learning a language, it’s good to learn your own introduction.

I will give you all of the phrases below.

But, you should also listen and hear real Korean – Press play below. Try this Free Lesson from KoreanClass101.com (click here to visit) for the complete explanation about introducing yourself!

Introduce Yourself in Korean Fluently 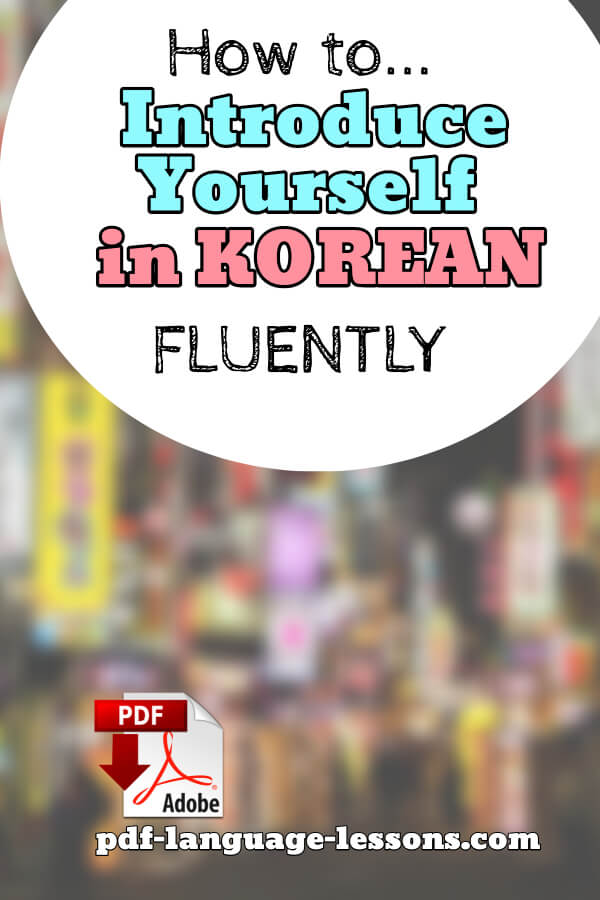 Okay, now here’s how to introduce yourself in Korean.

Before we learn how to say hi, you must consider how formal you want to be. Koreans have various levels of respect depending on the person’s age, gender and seniority

Annyeong (안녕) is the casual way to greet someone in Korea. Korean people use this informal version when greeting a friend or stranger of the same age or younger.

“Annyeonghaseyo” is a formal way to greet someone in Korean. This process of changing from informal to formal is simple. Formal version is just adding more words to the end of the sentence than the informal one.

Did you notice what changed from the informal version?

Look! (하세요) haseyo is added after (안녕) Annyeong. Haseyo’s verb meaning “to do”. Plus, it makes the sentence sound more formal and polite. Generally, you would use this formal version with people older then you and others you wish to show respect.

2. Saying your name in Korean

After “Annoyeong,” you can now introduce your name. Let’s take a look!

You can say either na-neun (나는) or jeo-neun (저는) in Korean.

Na-neun is informal and jeo-neun is formal. Then, you can say your name after that and the partial ya (야) placed at the end. In Korean, your name may sound different. For instance, Mathew is pronounced “maet-yu.”  So, if Koreans say your name differently, do not get surprised!

Next, let’s replace the particle ya (야) with eyo (에요). Why? When you do this, it becomes formal. Ya (야) is informal while eyo (에요) is formal.

Here is the other formal way to say your name.

By using –입니다. ending, it is formal. When you are speaking to someone who has a higher status or age, then you should use a formal version which sounds more respectful and polite.

Now you know how to say your name. You can now introduce yourself in Korean.

3. Nice to meet you in Korean

So far, you learned how to meet a person, say hi and tell then your name. Now, “Nice to meet you” in Korean is 만나서 반가워. This is informal. So, let’s look at the formal way to say nice to meet you; if yo(요) come after Banagawo, this sentence is changed to be formal just so you know.

After greetings, you can sau where you are from or you might ask where they are from.

The question “Where are you from?” in Korean is…

When someone asks you this, you can respond correctly by putting the country or city in the blank space in the example below. It is okay to say without Juhneun. Whether you do it or not, the meaning is same. Saying Juhneun is an emphasis to “I am”.

What if you’re from Canada, eh?

5. How to Introduce your Profession? “I am [occupation].”

They know your name and where you are from; but what do you do for a living? Are you a student, an English teacher, a programmer, an exotic dancer or a low-level YouTube celebrity? To ask them, use the question below.

Let’s say you are a student.

So, take the example below. In the [occupation] spot, you can put your job: student 학생 (haksaeng), English teacher 영어  선생님(yeong-eo seonsaengnim), Engineer엔지니어(enjinieo) and so on.

Knowing ages is important when interacting with Koreans. People decide how polite to be based on factors like job and age.  a

Try to not be offended as Koreans ask you your age or other personal questions the first time you meet. These questions may sound too personal to you. But, it’s really a way to show the proper level of respect.

Let’s look at the proper way to say your age in Korean. In newspapers, you could see the word “세” after the age, such as 23세. 이십삼 세 (iship-sam sae). But, people do not use “세”  often because it sounds too formal. To the say age,  people use 살 (sal) more commonly.

Let’s practice with some examples:

Let’s say you are twenty-three years old. You would say“스물세 살 (seumool se sal),” by using the Korean numbering system.

Conclusion: Now you know how to introduce yourself in Korean!

It’s as easy as saying:

Now you can speak some Korean. Done!

P.S. If you want to speak MORE Korean, may I suggest KoreanClass101? Basically, you sign up and they give you audio/video lessons and teach you real conversations. Can’t say hello? You will. Can’t write Korean? You will. They have tons of lessons you can take at your pace. Very fun and easy way to learn Korean.